Similar to the Japanese wall scrolls,the Fumei Friendship wall charm is meant for decoration. The Japanese characters (tomo-da-chi) stands for friendship.These characters are referred to as “Hiragna”. the first symbol is “Kanji”. the Japanese developed the Kanji writing system modeled after Chinese pictogram.Although both the Chinese and Japanese share the same Kanji the meaning and the punctuation are different. Hiragana on the other hand is a an simple form of Kanji created purely by the Japanese.

Because the Japaneses don’t space out their words the text is often displayed vertical ,and is read right to left.

The Fumei Friendship charm was created in 2007 by Jahnay Perrault. The idea sprung from having a heavy influence by Japanese culture.

For  this project the characters were written on clear marbles and accompanied by bamboo and a panda bear made with clear round marbles. 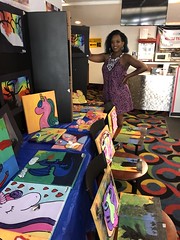